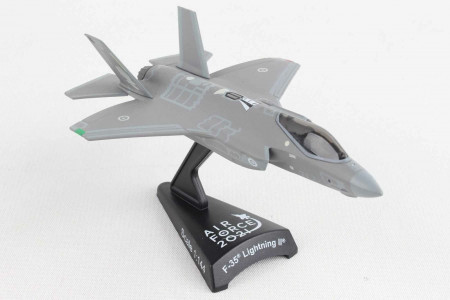 The F-35A is at the forefront of air combat technology.  Its advanced sensors and data fusion will allow it to gather more information and share it with other Air Force aircraft, Navy ships and Army units quicker than ever before. This will greatly enhance the Australian Defence Force’s situational awareness and combat effectiveness. In addition, to greatly enhanced situational awareness, the F-35A provides its pilots with significantly higher levels of lethality and survivability in combat.

The first F-35A aircraft was accepted into Australian service in 2018, with the first arriving in country in December that year.  The first F-35A squadron, No. 3 Squadron, will be operational in 2021. All 72 aircraft are expected to be fully operational by 2023.

This model air-plane is made from die-cast metal and include extensive detailing including landing gear. It is offered as a low cost alternative for collectors on a budget. Includes display stand.