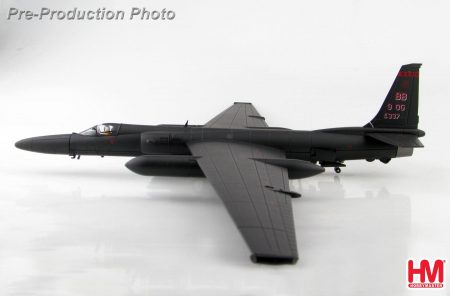 In 1954 Lockheed received approval US Govt to build a high-altitude reconnaissance aircraft through their famous  Skunk Works. The aircraft was a single seat, single-engine jet with a very high aspect ratio wing that could provide images day or night over Soviet territory. It was designated U-2 (U=utility) and given the name “Dragon Lady”. The first test flight took place in 1955 and was used by the CIA and the USAF during the Cold War. This particular aircraft was for a time stationed in the UK in May 1982 to Detachment 4 at the 9th SRW at RAF Mildenhall.
This model air-plane is made from die-cast metal and include extensive detailing. It is similar in quality to Aviation72, Oxford, Corgi, Century Wings, Witty Wings and JC Wings.