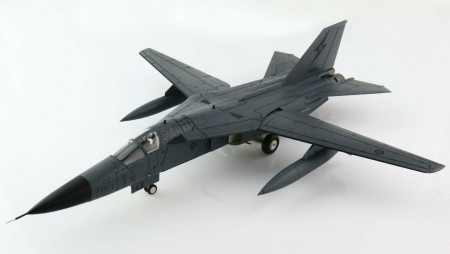 This F-111 first flew in it’s original configuration in January 1969 although its delivery to the RAAF was delayed due to developmental problems. In 1980 this airframe was one of four that were modified to the RF-111C standard as highly capable reconnaissance aircraft. Sadly this aircraft was retired after a wheels up landing in 2006. It was finally scrapped in 2011.

This model aircraft is made from die-cast metal and include extensive detailing. It is similar in quality to Corgi, Aviation72, Calibre Wings and Century Wings.