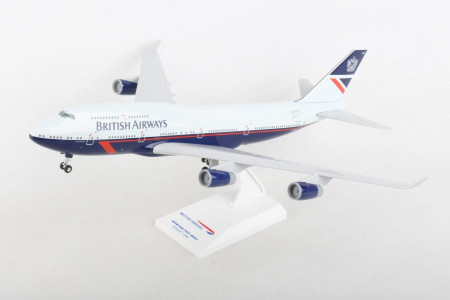 To celebrate the 100th anniversary of the founding airlines that eventually became British Airways, the airline chose 4 aircraft, 3 B747’s and a A319 to paint in retro schemes as a way of highlighting the heritage they have inherited. This 747, G-BNLY was decorated in the iconic British Airways ‘Landor’ livery designed by Landor Associates and used between 1984 and 1997. As British Airways prepared for the privatisation that would take place in 1987, a new livery and fresh corporate identity was created. A key part of the design was incorporating the best of British Airways’ past while being innovative and recognisably British. The quartered Union Flag on the tailfin was retained from the previous ‘Negus’ livery and the addition of the Coat of Arms against the midnight blue was promoted as a ‘touch of class’. The Speedbird symbol, that had been ever-present on British Airways and aircraft, was stylised to create the new red Speedwing; which was designed to become an integral part of the livery and synonymous with British Airways.