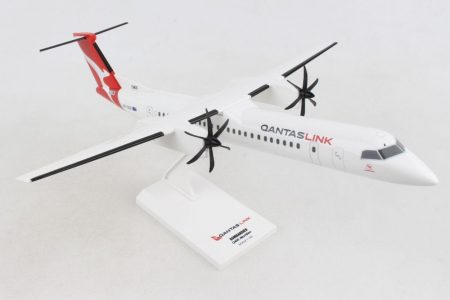 The Dash8 is an extended version of the earlier -200 and -300 still operated by the airline. The Q400 was introduced in 2005 and had a longer airframe that was stretched 6.83 metres over the Series 300 10.26 metres over the Series 100/200), it has a larger, stouter T-tail and has a passenger capacity increased to 68–90. The Series 400 uses Pratt & Whitney Canada PW150A engines rated at 4,850 shp. This aircraft was originally leased to Sunstate and arrived in 2006 and named Gladstone. It currently flies as depicted here with QANTASLINK

This model aircraft is made from resin and plastic and include extensive detailing. It is similar in quality to Wooster, Herpa, PPC and Hogan models

THIS MODEL IS SUPPLIED WITH A DISPLAY STAND BUT DOES NOT INCLUDE LANDING GEAR.