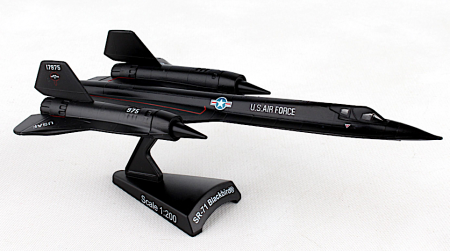 After a Soviet surface-to-air missile battery showdown with a USAF U-2 spy plane in 1960, the US government realised they needed a reconnaissance plane that could fly even higher – and outrun any missile and fighter launched against it.

Lockheed’s answer was the SR-71 Blackbird. It was closer to a spaceship than an aircraft, made of titanium to withstand the enormous temperatures from flying at 2,200mph. Its futuristic profile made it difficult to detect on radar – even the black paint used, full of radar-absorbing iron, helped hide it.

This model air-plane is made from die-cast metal and include extensive detailing, they DO NOT include landing gear. It is offered as a low cost alternative for collectors on a budget. Includes display stand.