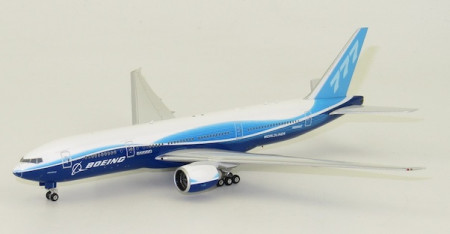 This the very first Boeing 777 was revealed to the world in April 1994. It was unique in being the first commercial aircraft designed entirely by computer. Each design drawing was created on a three-dimensional CAD software system known as CATIA, sourced from Dassault Systemes and IBM. This let engineers assemble a virtual aircraft, in simulation, to check for interference and verify that the thousands of parts fit properly—thus reducing costly rework. This model comes in the later Worldliner livery used to promote the newer LR series model which at the time was the longest range twinjet in the world.

This model aircraft is made from die-cast metal and include extensive detailing. It is similar in quality to Aeroclassics, NG Model, JC Wings, Geminijets and Aviation400.