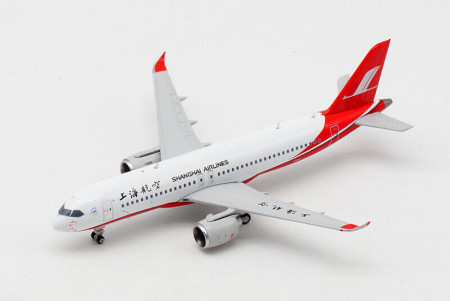 The Commercial Aircraft Corporation of China, Ltd (COMAC) is a Chinese state-owned aerospace manufacturer established on 11 May 2008 in Shanghai. The C919 is the second type to be made by the company, it had its maiden flight in 2017 and has attracted interest from several Chinese airlines. The C919, which can seat up to 168 passengers, is meant to compete in the market for single-aisle jets. This model depicts a proposed Shanghai aircraft which may be delivered in 2022.

This model air-plane is made from die-cast metal and includes extensive detailing. It is similar in quality to Gemini Jets, Phoenix Models, NG Models and Aviation400.