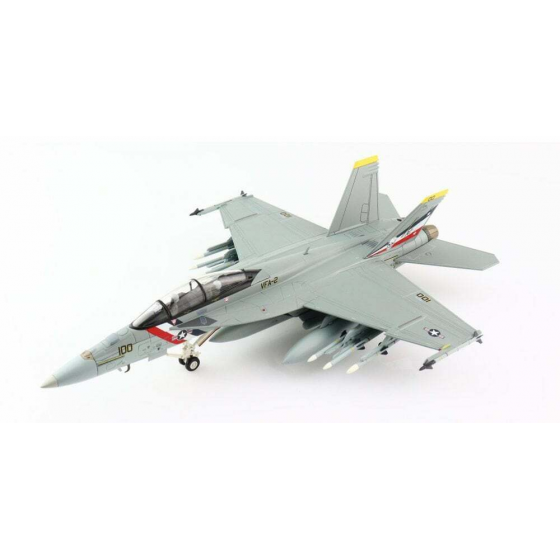 The McDonnell Douglas Boeing F/A-18E Super Hornet is a twin-engine multi-role carrier-based aircraft. The “E” variant is single-seater while the “F” variant is a tandem-seat configuration. They “are much larger, more advanced and more capable variants of the earlier F/A-18’s. The Super variant can carry a larger array of weapons as well as more of them and is capable of returning to the carrier while still carrying unspent munitions, a big savings in dollars.

On July 1, 2003 VF-2 became VFA-2 “Bounty Hunters” and converted from the F-14D to the F/A-18F Super Hornet. VFA-2 is based at NAS Lemoore, California and use NE as their tail code and “Bullet” as their callsign. From 2001 until 2020 the improved Block II F/A-18F’s were produced and equipped with AESA radar. F/A-18F NE100/165916 c/n F062 wears a patriotic red, white and blue stripe around the front portion of the fuselage called the “Langley Stripe” in reference to the markings of aircraft flown from the first USN carrier USS Langley.