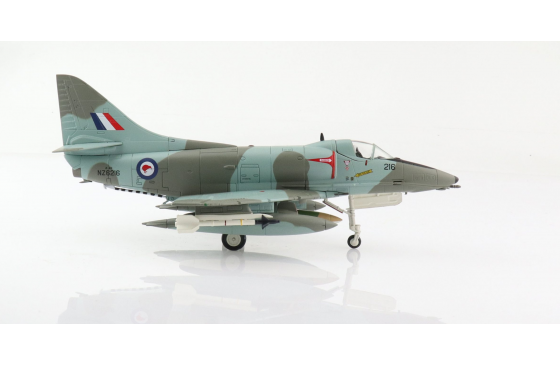 This Skyhawk was one of the second batch operated by the RNZAF. It was one of the aircraft received from the Royal Australian Navy when their carrier fleet was retired. It was formerly A-4G N13-155061, code 874. Prior to its Australian service it with the US Navy doing two tours of duty in Vietnam in its original form as an A-4F. It was converted to a  A-4G model in July 1970. It joined the RNZAF when it was delivered from Nowra to Ohakea in July 1984. This model depicts it as it was at that time. It was subsequently converted to a K model as part of the KAHU upgrade. The aircraft has been kept in New Zealand and is on display at the Omaka Aviation Heritage Centre near Blenheim.