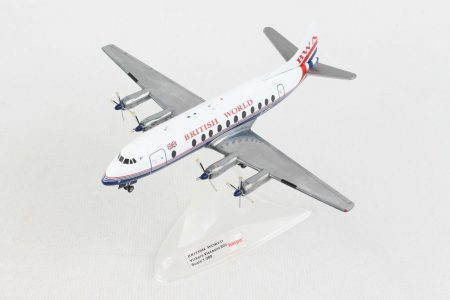 In 1996 BWA used this aircraft on a special enthusiasts charter to make the last Viscount passenger flight from Southend to the Channel Isle of Jersey and return. On the 18 April 1996 BWA – British World Airlines Viscount G-APEY participated in a special retirement celebration at Heathrow. In attendance was Sir George Edwards, Sir Peter Masefield, Lord King, Ralph Robins (Rolls-Royce), Captain Jock Bryce (Viscount test pilot), the chairman of Vickers-Armstrongs, plus lots of invited guests. The MC for the event was Raymond Baxter. The guests were taken for a flight from Heathrow on board G-APEY. Viscounts finally retired from service in the United Kingdom in January 1998.

This model aircraft is made from die-cast metal and includes extensive detailing. It is similar in quality to Gemini Jets, JC Wings and Phoenix Model.