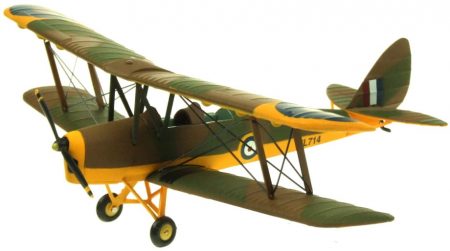 The de Havilland DH.82 Tiger Moth is a 1930s biplane designed by Geoffrey de Havilland and was operated by the Royal Air Force (RAF)  as this example depicts. The Tiger Moth remained in service with the RAF until replaced by the de Havilland Chipmunk in 1952, when many of the surplus aircraft entered civil operation.

This model aircraft is made from die-cast metal and include extensive detailing. It is similar in quality to Corgi, JC Wings, Hobbymaster, Witty Wings and Oxford