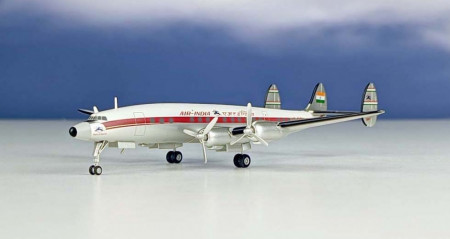 Air-India took delivery of it’s first two Lockheed Super Constellation L-1049C airplanes in June & July 1954. This one, its first was delivered on 6 June 1954 as VT-DGL and named Empress Nurjehan (Later renamed as Rani of Jhansi). It was sold to the Indian Air Force in March 1955 when newer versions became available.

This model air-plane is made from die-cast metal and include extensive detailing. It is similar in quality to Inflight200, Gemini Jets, JC Wings and Aviation200.