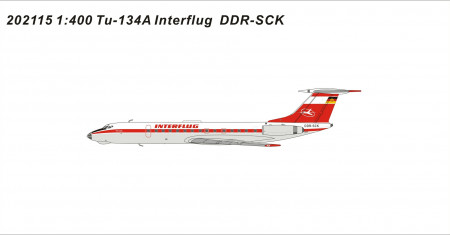 Interflug was the flag carrier for the former East Germany and being within the Soviet sphere it was a captive client for aircraft from the regime. The Tupolev Tu-134 is a twin-engined, narrow-body jet airliner built in the Soviet Union from 1966 to 1989. One of the most widely used aircraft in former Soviet countries, the number in active service is decreasing because of operational safety concerns and noise restrictions. The aircraft has seen long-term service with some 42 countries, with some European airlines having scheduled as many as 12 daily takeoffs and landings per plane. In addition to regular passenger service, it has also been used in various air force, army and navy support roles; for pilot and navigator training; and for aviation research and test projects.  A total of 854 Tu-134s were built of all versions (including test bed examples) with Aeroflot as the largest user; by 1995, the Tu-134 had carried 360 million passengers for that airline. A Tu-134 performed Interflug’s last flight, which was a service from Vienna to Berlin on April 30th, 1991.

This model aircraft is made from die-cast metal and include extensive detailing. It is similar in quality to Gemini Jets, Phoenix, JC Wings, and Aviation400.