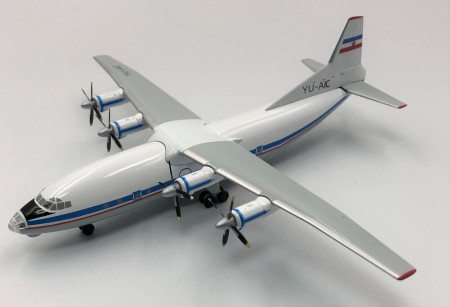 At the end of 1957, the AN-12 paratroop transport airplane designed for transportation of troops, military and fighting equipment weighting up to 20 tons performed its first flight. Being one of the best airplanes of such category in the world, the Antonov AN-12 became the basic airplane of the Soviet Union military transport aviation, and it had flying range up to 6,000 km. In total for the period from 1957 to 1972, 1243 AN-12 aircraft of various modifications were manufactured. Being part of the Soviet sphere of influence the An-12 was available to governments within the Eastern block as this Yugoslav example demonstrates.

This model aircraft is made from resin and includes extensive detailing. It is similar in quality to Hogan, Herpa, Inflight200, JC Wings, NG Model and Aviation200.