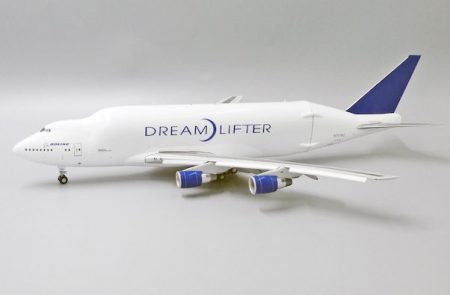 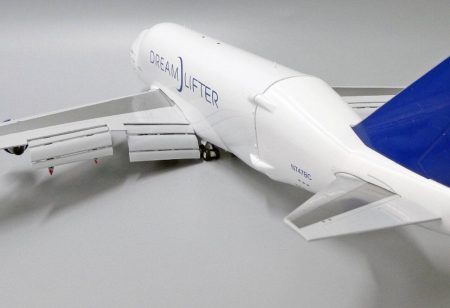 Boeing required a quick and efficient way to move components for its 787 to its assembly plant from around the world. As options were limited the company decided to use its own 747 design as a basis for a new freighter aircraft. The resulting LCF conversion was partially designed by Boeing’s Moscow bureau and Boeing Rocketdyne with the swing tail designed in partnership with Gamesa Aeronáutica of Spain. The cargo portion of the aircraft is unpressurized. Unlike the hydraulically supported nose section on a 747 Freighter, the open tail is manuvered by specialized trucks, and locked to the rear fuselage with 21 electronic actuators.

This model is of the first 747 Large Cargo Freighter (LCF) which was rolled out of the hangar at Taipei Taoyuan International Airport on August 17, 2006. It successfully completed its first test flight on September 9, 2006.

This model air-plane is made from die-cast metal and includes extensive detailing, including an opening rear door and extended flaps. It is similar in quality to Inflight200, Gemini Jets, Phoenix Models, NG Models and Aviation200.