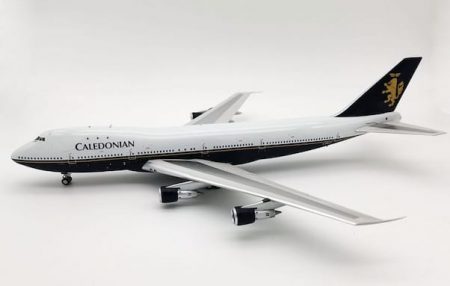 This early 200 series 747 was originally ordered by Scandinavian Airlines in 1971. It was sold and leased to British Airways in 1986 as G-BMGS, mainly for charter work including with Caledonian Airway as depicted by this model. She ended her life with Virgin Atlantic Airways as G-VOYG (Shady Lady) before being withdrawn in November 1998 and broken up at Cotswold Airport near Kemble, UK at the beginning of 1999.

This model air-plane is made from die-cast metal and include extensive detailing. It is similar in quality to Gemini Jets, Phoenix Models, JC Wings and Aviation200.