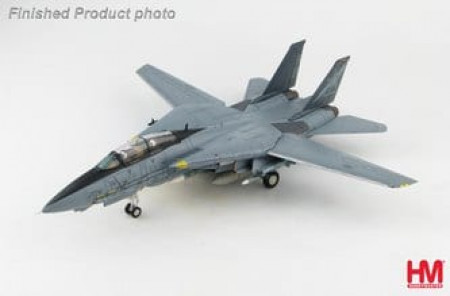 This particular aircraft as seen here was operated for a time by VF-33. In 1981 VF-33 transitioned to the F-14A Tomcat and joined Carrier Air Wing One assigned to USS America. Until 1992 VF-33 made twelve deployments with CVW-1 aboard the America to the Atlantic Ocean, the Mediterranean and the Indian Ocean. Their first deployment was a North Atlantic NATO deployment between August and October 1982. In 1987, they changed their name to Starfighters, which was their radio callsign. Their new patch featured a large star with a head-on view of a Tomcat. On 20 August 1985 VF-33 was the first squadron to complete 50 missile firings without a single failure. VF-33 “Starfighters” took 160395 on charge  in 1990 and it saw action in ODS. In October 1993 VF-33 was disestablished and the aircraft then went through the hands of several other operators before being sent to the National Naval Aviation Museum in Florida.