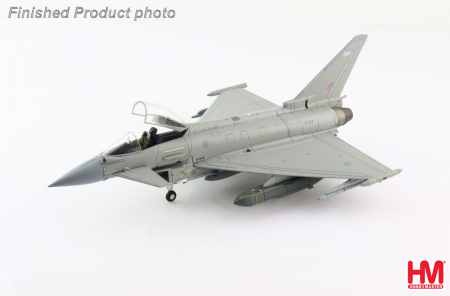 The Eurofighter Typhoon is a twin-engine multi-role fighter built by a European consortium made up of the UK, Germany, Spain and Italy. With 4 countries involved it is necessary to have what they call Tranches (similar to contracts) that are broken down into batches and blocks. The development of the Eurofighter began in 1983 with the prototype maiden flight of the Eurofighter taking place on March 27, 1994. The first fully equipped Tranche 2 Instrumented Production Aircraft (IPA7) took to the skies on January 16, 2008.

Operation Shader was the operational name given to the UK’s portion of the U.S. led attacks against ISIS. The UK provided air, ground and sea support to the operation as well as humanitarian aid. RAF Akrotiri is located on Cyprus and is home to the Cyprus Operations Support Unit and is a forward base for operations in the Middle East. Eurofighter Typhoon’s departed Cyprus in March 2021 equipped with Storm Shadow ALCM’s, making this a first time use in combat. This aircraft was operated by 1(F) Sqn, and is displayed with the Storm Shadow missiles.