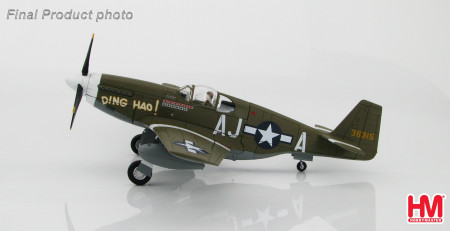 The only difference between the North American P-51B and C variants was the B was built in California and the C in a new plant in Texas. The B variant first flew on May 5, 1943 with 1,988 built while the C variant saw 1,750 built. On December 1, 1943 the P-51B Mustang flew its first combat mission and in March 1944 provided bomber escort to Berlin. The high shape of the P-51B/C dorsal spine gave it the name
“Razorback”.

P-51B 43-6315 “Ding Hao” (Chinese phrase, “very good” or “number one”) was the second P-51B assigned to Lt. Col. James Howard. This aircraft had the improved sliding Malcolm Hood canopy. James Howard was an American born in China and moved to the USA, became a USN pilot, left to join the AVG and later flew with the 354th FG/ 487th FS. He is credited with 6 Japanese victories and 6 more confirmed plus 1 probable and 2 damaged, for a total of 8.333 during World War II.

This model air-plane is made from die-cast metal and include extensive detailing. It is similar in quality to Century Wings, Calibre Wings, Corgi, Witty Wings and Aviation72.