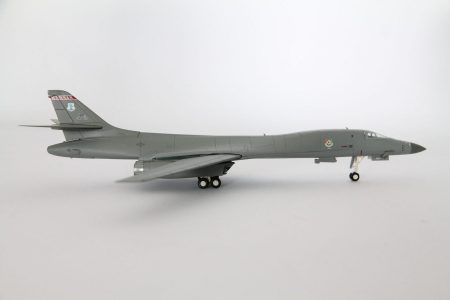 Designed as a replacement for the B-52, the B-1 Lancer was first flown on December 23, 1974 but did not enter service until 1986. First envisioned in the 1960s, this aircraft took twenty years to enter service. Its development was halted and restarted numerous times for various, mainly political reasons. Today, the B-1 operates as a long-range, supersonic low-level penetrator. Its speed and survivability are superior to the B-52, and its high-speed strike and large payload capabilities give it a unique role in modern strategic bombing operations.

The Flying Jayhawks of the 127th Squadron were equipped with the supersonic number B-1 until 2002. Next to the nose art referring to the Wichita, Kansas based veterans’ organization of Native Americans, this aircraft also had shark mouths applied to the engine intakes.

This model aircraft is made from die-cast metal and includes extensive detailing. It is similar in quality to Hobbymaster, Geminijets, Inflight200, JC Wings, NG Models and Aviation200.