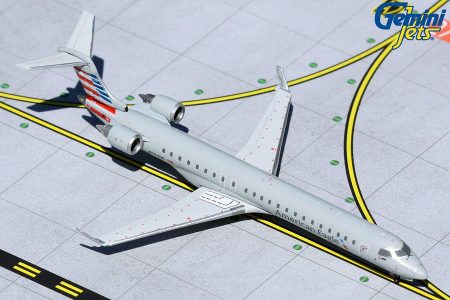 The CRJ900 is a stretched 76–90 seat version of the CRJ700. The first CRJ900 was modified from the prototype CRJ700 by adding longer fuselage plugs fore and aft of the wings. The CRJ900 also features strakes located at the rear of the plane. The CRJ900 competes with the Embraer 175, and is more efficient per seat-mile, according to Bombardier.

The wing is wider with added leading edge slats, the tail is redesigned with more span and anhedral. The cabin floor has been lowered 2 inches which gains outward visibility from the windows in the cabin as the windows become closer to eye level height. The cabin has a recirculation fan which aids in cooling and heating. The environmental packs have a target temperature instead of a hot-cold knob. The aircraft features two GE CF34-8C5 engines and in typical service, the CRJ900 can cruise 8–10,000 ft higher with a slightly higher fuel burn and an average true airspeed of 450–500 knots, a significant improvement over its predecessor. Its maximum ground take off weight is 84,500 pounds.

American Eagle has a fleet of 15 aircraft operated by PSA.