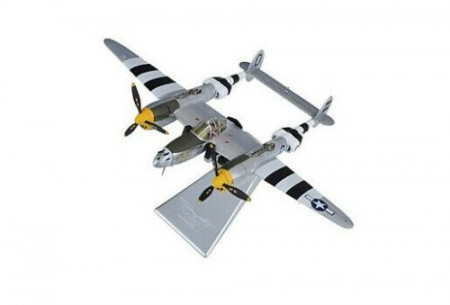 Jack M. Ilfrey was already a P-38 Lightning ‘ace’ when he joined the 79th Fighter Squadron of the 20th Fighter Group at Kings Cliffe in April 1944. At that time, missions were heading deep into Germany and although the Luftwaffe could be elusive, when they did show up, they came in numbers and were extremely aggressive.

On his third mission with the 79th, Ilfrey’s Lightning was involved in a mid-air collision with a Messerschmitt Bf 109, ripping almost four feet of his starboard wing off,  he made it back to base, but only just. His Lightning carried the name ‘Happy Jack’s Go Buggy’ on its nose, reputedly applied by his crew chief as a joke, because everyone thought Ilfrey always looked a bit miserable. By the 12th June, the Lightnings of the 20th FG had been assigned dive-bombing and strafing missions behind enemy lines and the mission that day was to destroy a vital railway bridge near the French village of La Possonniere on the banks of the river Loire, the Lightnings executed their mission with ruthless effectiveness.

With the railway bridge destroyed and the 20th Fighter Group fast earning a reputation as the ‘Loco Group’, Ilfrey was presented with a target of opportunity which was just too tempting to pass up. Diving on the locomotive filling his sights with all guns blazing, he saw the train’s boiler explode at the same time as noticing tracer bullets from a concealed anti-aircraft battery hitting his aircraft. At low altitude and with the starboard engine ablaze, Ilfrey jettisoned the canopy, released his harnesses and jumped from the stricken fighter, only to almost immediately bounce off the roof of a farm building, with his parachute only partially inflated. Lying dazed, but uninjured in a field in German occupied France wearing USAAF attire and with a wrecked Lightning fighter burning in the next field, Ilfrey knew he had to get as far away from the area as possible, so he concealed the parachute and ran. Fortunately for him, he was found by a local family with connections to the French resistance movement, who dressed him, gave him false identity papers, a map and bicycle, and sent him in the direction of the Allied invasion forces in Normandy. Thanks to their bravery and by avoiding as many German troops as he could along the way, Jack Ilfrey made it safely back to his home station at Kings Cliffe just five days after being shot down. Unusually in such circumstances, he would also be allowed back flying operationally just a few weeks later.

This model air-plane is made from die-cast metal and plastic and include extensive detailing. It is similar in quality to Century Wings, Calibre Wings and Forces of Valor.
Includes display stand