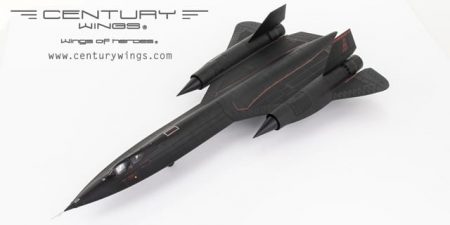 After operation by the USAF 9th Strategic Reconnaissance Wing this Blackbird made its last flight on 19 Mar’90. Following that it was planned to be used by NASA Dryden (CA) as N832NA in a testing role, however this did not happen. The SR-71A was overhauled at Palmdale in early ’95 and redelivered to the USAF in Jun’95 as a gap filler. It flew again from Beale AFB  before again returning to NASA but went into storage and was scrapped in late 2002.

This model aircraft is made from die-cast metal and include extensive detailing. It is similar in quality to Corgi, JC Wings, Oxford and Century Wings