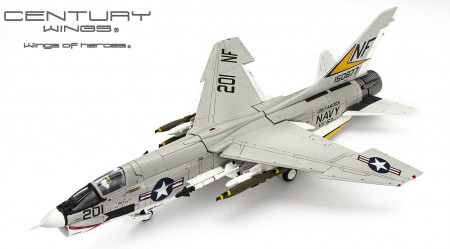 US Navy Fighter VF-53 Iron Angels squadron deployed to Vietnam three times aboard the USS Ticonderoga between January 1963 and May 1966. It then deployed to Vietnam once more In January 1967 aboard the USS Hancock, returning the US in July 1967. The Iron Angels deployed to Vietnam with their Crusaders three more times aboard the USS Bon Homme Richard from January 1968 to November 1970. Shortly after its return, the squadron was disestablished on January 29th, 1971. Designed as a supersonic air-superiority fighter, the Chance-Vought F-8 was first flown on March 25th, 1955. It was known as the “The Last Gunfighter” as it was the last American fighter to use guns as a primary weapon. It was the world’s first carrier-based aircraft to break the speed of sound.

This model aircraft is made from die-cast metal and include extensive detailing. It is similar in quality to Corgi, JC Wings, Oxford and Century Wings