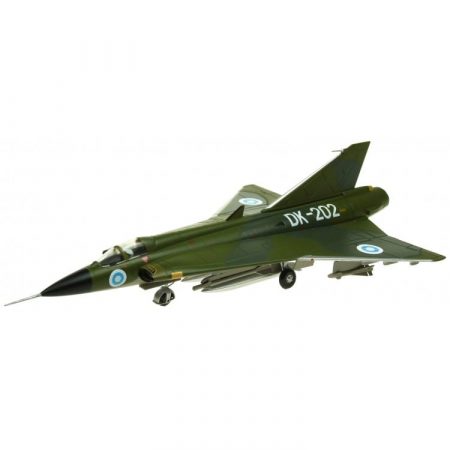 Up for sale is a brand new 1:72 scale Finnish Force Saab Draken J35 by Aviation72.

The Saab 35 Draken was a Swedish fighter aircraft developed and manufactured by Saab between 1955 and 1974. It was the first fully supersonic aircraft to be deployed in Western Europe.

The Draken was developed during the 1940s and 1950s to replace Sweden’s first generation of jet-powered fighter aircraft. It featured an innovative double delta wing; in order to test this previously-unexplored aerodynamic feature, a sub-scale test aircraft, the Saab 210, was produced and flown. Developed in Sweden, the Draken was introduced into service with the Swedish Air Force on 8 March 1960. It received the designation J 35, the prefix J standing for Jaktflygplan (Pursuit-aircraft)

The Draken functioned as an effective supersonic fighter aircraft during the Cold War. In Swedish service, it underwent several upgrades, the ultimate of these being the J 35J model. By the 1980s, the SAF’s Drakens had largely been replaced by the more advanced Saab 37 Viggen fighter. The type was also exported to Austria, Denmark, Finland as represented by this model, and the United States; the last operated the type as a training aircraft for test pilots.