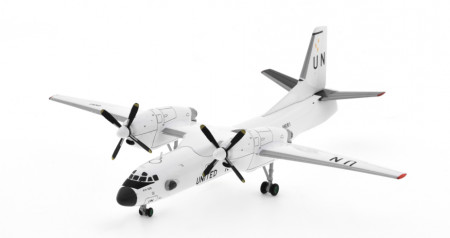 The An-32 is essentially a re-engined An-26. It is designed to withstand adverse weather conditions better than the standard An-26. Announced at the May 1977 Paris Air Show, the An-32 is distinguished from its predecessor by engines raised 1.5 m above the wing in order to avoid foreign object damage on rough, unprepared air strips.

Production from the Government Aircraft Factory in Kyiv, has included 123 aircraft for the Indian Air Force, which ordered the aircraft under strong foreign relations between then USSR leader Leonid Brezhnev and then India leader Indira Gandhi.

The majority of production has been for the Russian and Ukrainian Air Forces, with around 40 per year being built during the late 1980s to early 1990s.