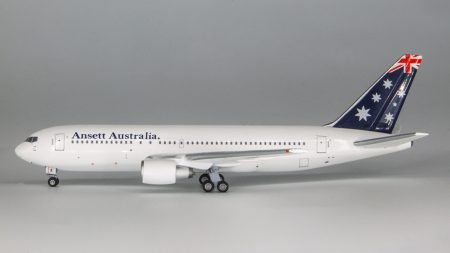 One of the rare three man cockpit 767’s unique to Ansett, RME was delivered in  June 1983. It flew in all three Ansett liveries until the airlines demise.

This aircraft was the last aircraft to depart from the old Brisbane Airport on March 20, 1988. It also inaugurated Ansett’s first full international service  on September 11, 1993 to Denpassar, Bali.

It was converted from the original 3 man cockpit to standard a 2 man cockpit in  March 1998. It was scrapped at Melbourne in November 2003.

This model air-plane is made from die-cast metal and include extensive detailing. It is similar in quality to Gemini Jets, Phoenix Models, JC Wings and Aviation400