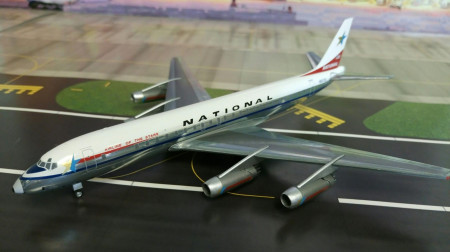 Delivered new to National in 1960 this DC-8  shown here in its original livery was the second of three of the -20 models. It was later named Sally when it was repainted in the Sunburst livery. It was sold to Pegasus International in 1973 who operated it until 1981 when it was scrapped.

This model air-plane is made from die-cast metal and include extensive detailing. It is similar in quality to Gemini Jets, Phoenix Models, JC Wings and Inflight200.