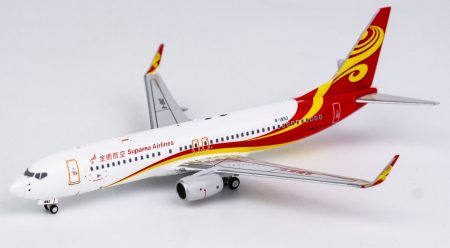 Suparna Airlines is a Chinese airline formerly known as Yangtze River Express and later Yangtze River Airlines after it began passenger services. The company’s headquarters are in Pudong, Shanghai. Established on 15 January 2003 as the second cargo airline in the country after China Cargo Airlines, Yangtze River Express was majority owned by the HNA Group (85%) with Hainan Airlines Co (5%) and Shanghai Airport Group (10%) holding the remaining shares. The airline took over the entire cargo operations of Hainan Airlines, China Xinhua Airlines, Chang An Airlines and Shanxi Airlines, all members of the Hainan Air Group. The airline rebranded as Suparna Airlines on 7 July 2017 taking it’s new name from the mythical bird also known as the garuda. This model is one of nine 737-800 now operated in the passenger fleet.