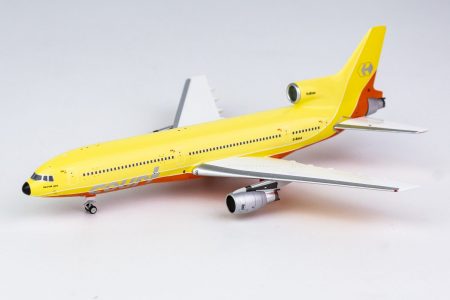 Court Line was an airline based in the UK that operated for the package holiday market. Aircraft were painted in colourful liveries designed by Peter Murdoch and they invented the concept of seat back catering. As well as that, they were the first European operator of the famous Lockheed L-1011 TriStar.

The colourful TriStars in Court Line configuration were packed with 400 seats. Two were delivered from Lockheed, this model G-BAAA named Halcyon Days and colloquially as “The “Big Banana” and a second aircraft G-BAAB called Halcyon Breeze.

Since Court Line would be operating to airports that might not have appropriate facilities, a degree of self-sufficiency was required. The airline used integral airstairs, which Lockheed designed to deploy electrically from the centre cargo compartment

All four doors on each side were the largest type available to facilitate passenger loading. No surprise with so many seats on board. Also, special baggage loading belts were designed into the cargo holds to help load and offload luggage quickly and easily.

Unfortunately, the package holiday market deteriorated right around the time Court Line put the aircraft into service in 1973. That resulted in the airline ceasing operations on 15 August 1974.

Both aircraft were returned to Lockheed and Cathay Pacific eventually took them in March 1977. The halcyon days of Court Line and its special wide body TriStars was over. Today the airline is remembered on a quite active Instagram account which is worth a look.

Read more about them and see an interesting video at https://travelupdate.com/court-line-lockheed-tristar/