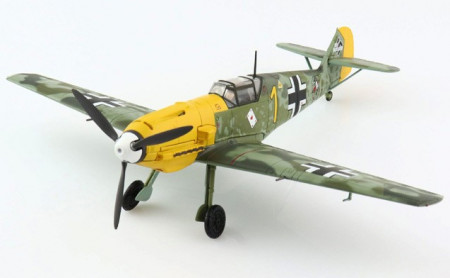 This aircraft was flown by Josef “Pips” Priller who joined the Wehrmacht in 1935 and transferred to the Luftwaffe in 1936. Originally assigned to JG 334 he transferred to JG 51 in May 1939. September 1, 1939 Priller was appointed Squadron Leader of the JG 51/6th Squadron, claiming his first victory on May 28, 1940 during the Battle of France. From July 12 1940 until November 1940, Stab JG 51 was located at Saint-Inglevert Airfield, France. On October 17, 1940 Priller claimed his 20th victory and was awarded the Knight’s Cross of the Iron Cross. Priller flew 307 combat missions claiming 101 victories.

This model aircraft is made from die-cast metal and include extensive detailing. It is similar in quality to Gemini Jets, Phoenix Models, JC Wings, NG Models and Aviation200.