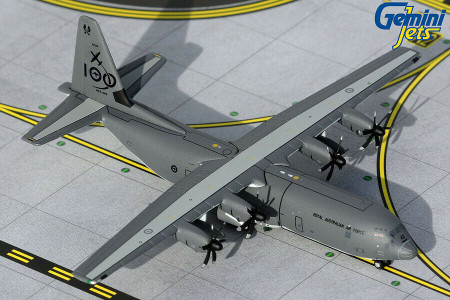 This Hercules was delivered tot RAAF Base Richmond in October 2001. It was the first aircraft to get airborne after the 9/11 attacks on the 14th of September from Dobbins AFB GA, ferrying Centre for Disease Control personnel and supplies to La Guardia Airport NY after all other flights were grounded. The aircraft was crewed jointly by Lockheed Martin Aero and RAAF personnel.
It is operated by 37 Squadron out of Richmond AFB. This model represents A97-442 with the special tail markings it wears celebrating 100 years of the RAAF.