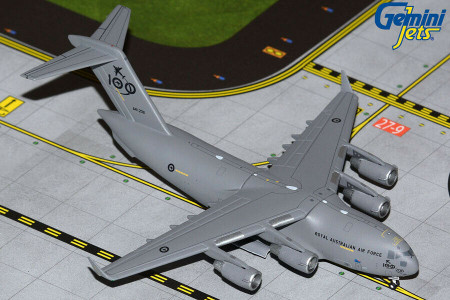 The Boeing C-17 Globemaster III is the primary long-range, heavy lift transport in the Royal Australian Air Force. The aircraft first flew in 1991, with initial deliveries to the US Air Force beginning in 1993 and fully operational status two years later in 1995. The C-17 can carry a wide variety of loads in its cavernous cargo bay anywhere in the world as aerial refueling has made the range virtually unlimited. It can be configured for passengers, paratroopers, palletized cargo, medical evacuation, helicopters and vehicles including the M1 Abrams Main Battle Tank. This model represents A41-206 with special tail marking celebrating 100 years of the RAAF.