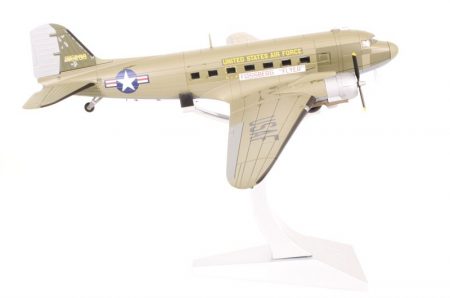 Chronologically, the first release CORGI’S Aviation Archive series was model number 47101, a Douglas C-47A Skytrain named the ‘Fassberg Flyer’, released to commemorate the 50th Anniversary of the Berlin Airlift and marking one of the most famous aircraft to take part in ‘Operation Vittles’. To mark the 20th Anniversary of the Aviation Archive range, Corgi have announced the inclusion of  a new C-47A Skytrain 315208 ‘Fassberg Flyer’,  which presents the collector with a 1/72nds scale representation of the very first model in this series.

There are few aircraft in the history of aviation that can boast the importance and reputation enjoyed by that of the Douglas DC-3/C-47 series. This revolutionary aircraft was responsible for establishing comfortable and reliable passenger air travel throughout America in the 1930s, as well as attracting significant interest from the US Army. As America watched Europe and the Far East plunged into conflict, they needed an effective aircraft to potentially transport troops into combat areas and resupply their forces wherever they may be operating and a military version of the rugged and reliable DC-3 was the ideal solution.

The Douglas C-47 Skytrain proved to be one of the most significant aircraft of the Second World War, keeping Allied forces on the move and the enemy on the back foot. In the years following the end of WWII, war weary C-47s were called upon once more, this time in a historic attempt to keep the city of Berlin supplied by air, following the imposition of a Soviet blockade. The ‘Fassberg Flyer’ was one of the aircraft involved in this operation, flying coal into the former Luftwaffe airfield at Fassberg. The Berlin Airlift is considered as one of the most significant events in the history of aviation.

This model aeroplane is made from die-cast metal and plastic and include extensive detailing. It is similar in quality to Century Wings, Calibre Wings, Oxford, Hobbymaster and Forces of Valor.